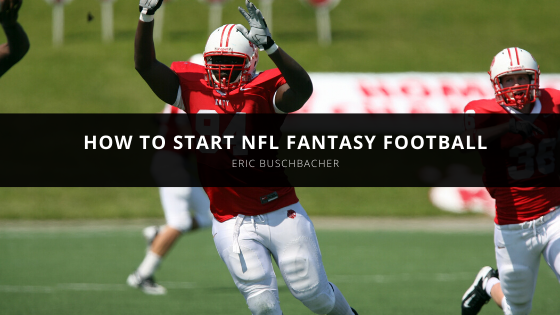 If you’re a football fan that is looking for an interactive gaming experience, Eric Buschbacher recommends learning about NFL fantasy football.

You’ve probably heard your friends and co-workers talking about it. They bring out their competitive sides, bet wagers, and talk trash about players. The NFL season starts in September, which means August is the perfect month to start drafting players in fantasy football. If you have ever wondered what the game is or how to get started, Eric Buschbacher explains the basics here.

In the game, you are a football franchise owner that gets to draft and manage your own team of players during the NFL season from September – February. Every week, you choose your starting lineup from your roster and play head to head against another team in your fantasy football league. The players score points in your game the same as they do on the field in real life, according to their running, catching, and touchdowns. The team with the most points wins! Eric Buschbacher notes that the fantasy football playoffs are held during the last few weeks of the NFL season, ending before real-life playoffs begin.

Although the initial draft of players is important, the way you manage your team afterward will also determine if you succeed or fail. Anything can happen during the NFL season, which means you may need to replace injured players, bench underperforming stars, or trade strategically. Are you ready to get started?

According to Eric Buschbacher, the first step is to join a league. Chances are, you already know a friend, co-worker, or family member playing in a fantasy football league. Approximately 20 million people play fantasy football every year, so start asking around! If you’re having trouble finding one, look online for free-to-play leagues!

Next, you’ll need to name your team and prepare for drafting. Don’t be afraid to get creative and witty with the name; everyone loves a good laugh! Remember, the fantasy “snake”-style draft is your chance to put all your skill and knowledge to the test. Eric Buschbacher explains that a random draft order is selected for your league, which is then reversed after the first time around. Don’t be upset if you’re last for the first round; it just means you’ll be first next time! Another popular option is an auction-style draft, which gives each owner a salary cap to bid on players, with the highest bid winning the player.

When it comes to drafting strategy, Eric Buschbacher believes you should go for a good mix of reliable players and those with potential. “Sleeper” picks can definitely add a lot of value to a low draft pick. Make sure you get players to cover all the field positions and acquire appropriate backups in case they get hurt. Another common strategy is to draft as many players as possible from your favorite team.

Finally, be prepared to check on your team. Since NFL games take place on Sunday, you will need to prepare your roster on Saturday and see how your players did on Monday. Eric Buschbacher notes that compared to other sports, fantasy football has a relatively low time commitment. The more times you participate, the better you’ll do in the future.