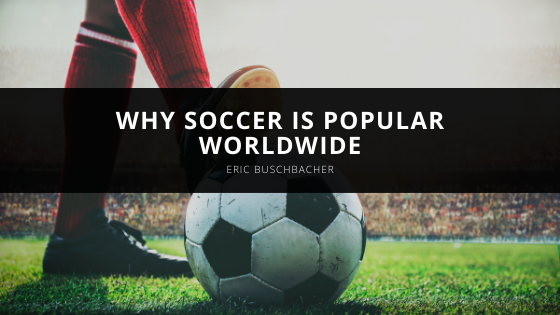 No other sport matches the worldwide hype for soccer, Eric Buschbacher shares why it has become a global game.

Soccer reaches to every corner of the planet and can be found in both rich and poor areas alike. The FIFA World Cup, held every four years, is the most-watched sporting event in the world, with more than half of the human population tuning in. World Cup enthusiast, Eric Buschbacher, believes that soccer is more than just a sport, but a universal language across all cultures that is to be celebrated.

Soccer breaks barriers and unites hundreds of millions of people, no matter their background or beliefs. Cheering for your soccer team becomes the ultimate symbol of patriotism and pride for your home country. Eric Buschbacher explains that to many, their soccer team represents the people of their country and the passion they have for their culture. During a game, the crowd is decked out in patriotic gear to encourage the players and show support.

The FIFA World Cup even attracts people who don’t usually watch soccer. Everyone wants a reason to come together in front of the rest of the world. It sparks passion and excitement everywhere. You can feel the cities come to life as the fan following, which is bigger than that of even the Olympics, rises up. But why is this single sports event so popular?

Eric Buschbacher believes it starts with the simplicity of soccer, which is its biggest asset. The sport is available to everyone, whether they know much about it or not. The rules are simple, and the game is easy to follow. Other sports like American football or ice hockey are much more complicated to understand. When there are a lot of rules to learn, people can quickly lose interest.

In addition to its simplicity, soccer is also accessible to everyone. It can be played in your backyard, the neighborhood park, at school, or on vacation. Eric Buschbacher notes that the low costs associated with equipment are also a plus. Families can buy one soccer ball and a pump and have it last for years. Even the poorest kids in Africa play soccer using makeshift goals and balls.

The inclusivity of the sport brings joy to many and gives hope that anyone could one day be a global soccer superstar. Eric Buschbacher explains that it removes boundaries and opens doors because talent can be found anywhere in anyone. It keeps kids out of trouble and off the streets because they’re practicing the best sport with their friends. When players make their way out of poverty and onto the biggest stage in the world, it gives people from their home country an even stronger connection to the sport.

Soccer is a game that is watched and followed year-round, which means the magic never dies. People are always talking about games, players, and memorable moments. It builds a sense of community within the fan base that brings them together more than any other sport. Eric Buschbacher believes the interest in soccer will continue to grow, especially in the West, where it is starting to gain more traction.