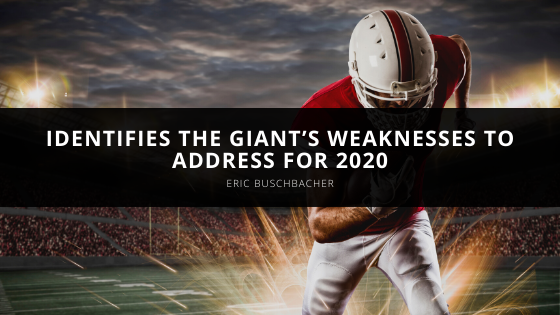 Four games are remaining in the NFL season, and the New York Giants sit at 2-10. With last week’s loss to the Green Bay Packers, the Giants are officially eliminated from the NFL playoff contention. Eric Buschbacher wrote off the Giant’s playoff chances after their week eight loss to the Detroit Lions. After falling to 2-6, the team’s playoff chances were slim at best. No team in the NFL during the Super Bowl has started 2-6 and made the playoffs.

With the season already over after eight games (half the season), Eric Buschbacher is looking forward to the 2020 NFL draft. The Giants have many gaping holes in their roster that need to be addressed to build a better team for 2020. They will have $61 million in salary cap for next year, currently eighth-most cap space in the NFL as of now. They can create more room for more free-agent talent, but history tells us that good teams build their rosters through the draft.

Eric Buschbacher believes that the Giants’ priority should be offensive tackle. The Giants’ current tackles are Mike Remmers and Nate Soldier. Mike Remmers will be 31 years old next season, and Nate Soldier will be 32. The majority of elite players in the NFL begin to decline in their early 30’s, so the Giants need to protect their new rookie quarterback, Daniel Jones. In 11 games, Daniel Jones was sacked 33 times. If the offensive line is not addressed, Daniel Jones will be sacked even more.

The Giants’ next need for 2020 is for an inside linebacker. Alec Ogletree is due $11.75 million in 2020. The defense has been extremely underwhelming in 2019, having the seventh-worst defense in the NFL. If the Giants release Alec, they would save $8.25 million in cap space. The defense needs a leader on the defense, and it seems that Alec Ogletree is not it. Another need for defense is an edge rusher. Their pass rush has been struggling in the past few years. The NFL is a passing league, and teams need edge rushers to disrupt the pass.

Overall, the Giants have more holes than that to fix. But these are the positions that usually determine a team’s success. After quarterbacks started putting up record stats due to rule changes on defense, teams shifted their focus from covering the opposing team’s receivers, but get to the quarterback before he gets the ball off. Thus, teams started creating more schemes and concepts to make the edge rusher and linebackers to make plays. In return, having a talented offensive line (primarily the tackles) needs to be a point of emphasis for a team’s success.

After completing an associate’s degree in business, Eric Buschbacher earned his bachelor’s degree in Business Management from St. Johns University in Jamaica, NY. He is now an eager young professional looking to develop new skills in a challenging work environment.

Eric Buschbacher is an avid sports fan that played competitively in basketball and soccer. He enjoys rooting on the Giants, Knicks, and Yankees in addition to watching top European athletes compete in the Euro and World Cup. In his spare time, Eric Buschbacher enjoys going to the gym to work on strength training